because the imbecile-gurus like this macaque determine the direction of the Linux development, and define the entire discourse around it.

...and never ever tell me about the "high asian IQ" again.
(

THIS USER BLOCKED YOU.

THIS USER BLOCKED YOU
( 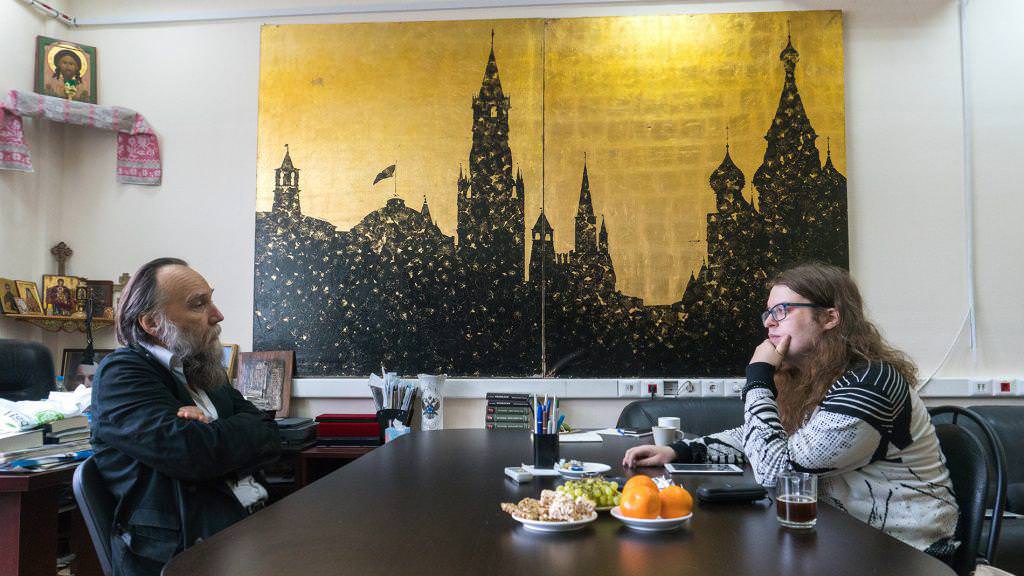 Comments |Comment on this)
THE EVOLUTIONARY THEORY OF VALUE

We propose the first economical theory of value that actually works. We explain evolutionary causes of trade, and demonstrate how goods have value from the evolutionary perspective, and how this value is increased with trade. This "Darwinian" value of goods exists before humans assign monetary value (or any other value estimate) to traded goods. We propose objective value estimate expressed in energy units.

The present theories of value do not work. The monetary theory has some limited use in the context of a stable well informed market far from the boundary conditions; the Marxian theory (with all its variations and upgrades) has no connection with reality at all; the "Subjective value" theory is not even a theory (besides stating one obvious fact, it does not add any information); the "Political Power" theory describes merely one pathological case of value assessment.

Marx wanted to measure "intrinsic value" of goods by the amount of invested labour. Which is obviously irrelevant to any sensible notion of value from the consumer's perspective. We can immediately destroy the Marxian theory of value by producing two identical shoes: one made by a skilled craftsman in his shop, and another made by him in the same shop with prison moons attached to his legs. The weaselly correction "socially necessary labour" does not remedy the stupidity of the labour theory of value. The socially necessary labour to build Titanic in Himalayas is much higher than the socially necessary labour to build Titanic in Belfast -- according to Marx, Titanic is more valuable in Himalayas. Apparently, Marx completely failed to capture the idea of value, therefore will be ignored from now on.

The monetary value of goods is the only value estimate practically available to us. Markets use prices with great success in order to establish tolerably unfair exchange rates of goods. People successfully use prices to reason about the value of goods and the value of transactions. However, it is a huge mistake to say that the price is the value. Imagine you need a pair of shoes. Imagine it now. If you succeeded then my point is proven. You just evaluated your need for shoes WITHOUT THE KNOWLEDGE OF THE PRICE.

Generally speaking, when you enter a marketplace you pay attention to the properties of goods before you learn their prices, the very decision to enter the marketplace and the decision to approach a particular supplier is usually made regardless of the pricing information. Prices may limit your trading options, by they do not affect your internal estimate of the value of goods. Moreover, you decide whether to make a transaction according to the discrepancy between the price and the value. Therefore, if the price IS the value, then you must commit all transactions within your financial capabilities, and you have no reason to deny any deal you can afford -- which is apparently ABSURD.

According to Adam Smith, you can use the price of a massively traded item as a substitute for its "global" value, which is calculated by markets (very accurately in many practical cases), this result is calculated from the aggregate demand. THE PRICE IS CAUSED BY THE DEMAND, so you need the demand first. And the demand is the expression of how much people VALUE goods. Thus when you claim that value is derived from the price you make a circular argument.

We recognize the fact that individual customers value goods differently. Moreover, this fact is necessary for a market to exist. If two people value an item equally, they have no motive to trade this item. If the value of goods is 100% intrinsic then all well informed people value all things equally, then no honest trade is possible, which is contrary to the observable reality.

Thus, the value is "objective" and "subjective" at the same time -- it depends on both intrinsic properties of goods and the customer (alongside all his local circumstances). In other words, the economic value is a function of a pair {a customer in a particular local situation, a goods item of certain properties}. A proper theory of value must reflect this fact.

THE INESCAPABILITY OF THE INTRINSIC VALUE

Every phenomenon existing within a biological system must have been evolved in the Darwinian sense.

Markets exist within a biological framework: the extended phenotype of Homo Sapience.

Therefore markets have to have survival value (in the Darwinian sense).

A market is merely a collection of transactions, it must derive its survival value from its transactions.

The requirement of the survival value for an evolved phenomenon has two weak spots: sexual selection (which happens to be arbitrary in many cases) and parasitic memes (such as religions). However, a religion shapes human behaviour in a way that creates "artificial" survival value, e.g. killing infidels, whereas sexual selection provides value in and of itself. That means markets require a Darwinian explanation involving aforementioned "intrinsic value" anyway.

THE SOURCE OF THE INTRINSIC VALUE

A pair of shoes gives you certain reproductive advantage comparing to not having shoes at all. You save some energy on heating your feet, some energy on healing inevitable damage to your soles, lots of energy on thickening your soles, and all this is compounded with the energy required to acquire extra food that is your only energy source. Your life with shoes is visibly more efficient. All in all you use some animal skin INSTEAD of growing your own -- you shifted the expenses to another animal.

The vast majority of all things traditionally traded in the world's markets provide reproductive advantage to buyers. Before anything else, it is FOOD; then clothing; then tools; then housing; then fuel; then medicine -- all these things one way or another prolong your life and save your labour, which translates almost inevitably into greater reproductive opportunity (not only more offspring, but also better reared ones).

Naturally, the buyer's perception of the goods value is not perfectly accurate and his psychology is exploitable and the market (as a finite knowable aggregate of human strategies) is also exploitable. This fact allows for fake-value goods (e.g. rhino horns, eye-phones, fridge magnets) to be traded. These goods do not affect our reasoning for two reasons: (a) fake-value goods are vastly outweighed by real-value goods, food alone trumps all "gadgets" combined (b) market exploiting strategies are secondary to the market, a market exploit, in order to evolve itself, requires its victim market to evolve earlier. As we are comparing (from the evolutionary perspective) the "no-market" situation vs a situation of arbitrarily early phase of market development (reasoning about the cause of the market itself), we can safely discard these issues.

A second pair of shoes gives you much lower reproductive advantage relative to the first pair, because you can only wear one of them at a time. The aggregate value of these two pairs of shoes is lower than the double value of one of them. A man having no shoes does value your second pair as high as you value the first pair. If you sell your second pair to him you receive from him in compensation as much value as he acquires with these shoes -- as the result you end up having the double value of a pair of shoes, which is much greater than the value you had before the transaction. Since the motivation of the buyer is symmetric to yours, he must be having some comparable profit from the transaction (e.g. he could have had two identical items of clothing). You both profited from the same transaction. This is how a transaction itself has value derived from the value of traded goods.

The cost of production adds more motivation for trade. If you spend less energy/labour to produce a pair of shoes than another man does it is advantageous for him to buy shoes from you rather than manufacture them -- this is how end up having two pairs of shoes in the first place.

Apparently the intrinsic value of goods is multidimensional. Food alone has many dimensions of value (and humanity keeps discovering new ones): sugars, fats, proteins, multitude of vitamins and microelements, essential amino acids, and something we do not know yet -- all these are required in certain proportions rendering one-dimensional comparison between different food types impossible. Shoes and axes add some more completely independent dimensions of value... However, food is consumed for some purpose, tools are used for some purpose too. From the evolutionary perspective this purpose is ultimately the reproductive advantage. From the multitude of properties through the several intermediate goals (satiation, resting, lust, etc) to merely one measurable parameter the reproductive success.

We can compare goods (being consumed/used by people (remember the value is a function of two arguments)) by how much they affect the consumer's reproductive success (perceived or potential success or the expected value of the success in the probability theory terms).

Somewhat counterintuitive we propose to use energy units for this measure, i.e. translate "reproductive success" into the amount of energy saved (compared to what competitors have spent or might have spent). This makes sense because the energy saved by a person does translate into reproductive success of this person -- the less energy you spend for a unit of food, the more/better offspring you can rear.

Another reason to use energy units is that we can express in energy units the cost of an item of any level of refinement. Because all we harvest or manufacture costs human labour, which is ultimately what we eat, and all we eat is ultimately stored sunlight, the cost of converting sunlight and storing it in chemical bonds is again energy. The forms of stored energy (different fuels and foods alike) are all interconnected with energy conversion paths of certain specific cost for each -- it allows us to use single abstract energy unit for all forms of energy.

Example: to extract nutrients and energy from grass you need to spend some energy (some in form of digestion, some in form of labour (to harvest and chew the grass), and some in the form of waste); a cow can do the same job much more efficiently with much less waste; by eating a cow you save plenty of energy -- you shifted the largest part of the expenses onto the cow; and by taking care of a domestic cow, you save energy that you would otherwise spend on hunting a wild one; and by manufacturing tools involved in the process you save your labour (which is also a form of energy).
Although it is difficult to compute the exact amount of energy invested in an item and the exact amount of energy it provides to the consumer in a general case, it is fundamentally possible. More importantly, the energy measure can be used for "local" comparison without knowing the absolute energy value.

We excluded from the scope all pathological market phenomena. However, the conspicuous consumption does not destroy the reasoning above, it does provide reproductive advantage through sexual selection.

The Selfish Gene
The Extended Phenotype
The Wealth Of Nations
Wikipedia
"trump splits our alliance!"
yeah! the alliance between the legs and the prison moons.
(